Lining Up for the Vaccine: Worth The Wait

The line was long, but it seemed worth it to those who stood outside Beach Channel High School (BCHS) on Monday, January 18. As the COVID-19 vaccine continues to roll out, there have been concerns regarding the process leading up to vaccination. First, how does one make an appointment? Second, is it difficult to make an appointment? Third, when one does successfully make an appointment, how long does one wait in line to be vaccinated?

While speaking to people on the line stretched out along

Water Rescue of a Rescue

That’s one lucky pup! A dog that was rescued from Jamaica Bay is now back with its owner.

It’s a good thing Scott and Carol DeNaro, owners of Harbor Optics, have sharp eyes! As they pulled in for work on Wednesday, January 20, the pair spotted a dog struggling in the bay behind the store. They quickly notified police and NYPD Harbor Unit Adam responded, quickly rescuing the panicked animal.

The dog was brought to the nearby Animal Hospital of the Rockaways, to be checked out as she awaited

A March for MLK

Revving Up for Reality TV

It’s about to get real for The Rev. Reverend Richard Hartley, the longtime pastor and choir director of Haven International Ministries on Beach 84th Street, has a larger-than-life personality fit for reality TV and now the nation will get to see it. “The Rev” debuts on the USA Network on Thursday, January 21.

Hartley, who now resides in Valley Stream with his family, got his start in Rockaway. “I was born in the Hammels Projects on 81st Street,” he told The Rockaway Times. Hartley went to

In Search of Vietnam Tom

My Rescue Story: When Animal Advocates Save Humans Too

Taking the Plunge into Love 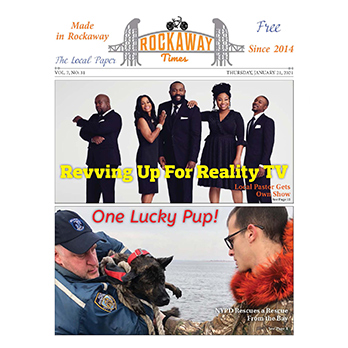