Advocates for QueensLink have not given up hope. On Sunday, October 9, the organization fighting for the reactivation of the Rockaway Beach Branch rail line were joined by elected officials and supporters to advocate for the transportation option in wake of Mayor Eric Adams announcing a park would be designed for the area where the train could run.

On September 16, Mayor Adams announced a $35 million investment in the design and construction of the Metropolitan Hub (Met Hub) in Queens, a park which would run along the area where advocates have spent decades fighting for the reactivation of the rail line connecting southern Queens to northern Queens. The announcement came as a shocking blow for those fighting for the transportation option, as a park could potentially squash all dreams of reactivating the rail line.  But activists for QueensLink, the proposed extension of the M Train from Rego Park to Rockaway along an old 3.5-mile LIRR line, are not giving up just yet. They’re fighting even harder. 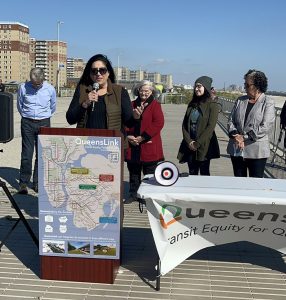 A crowd gathered on the boardwalk at Beach 92nd Street on Sunday for a rally in support of QueensLink. Attorney Mike Scala led the event, saying, “Why are we here? We need better transportation in the Rockaways and around New York City. Rockaway suffers from the worst commute times in all of NYC and we’ve been fighting for this asset. Some people might know it as the Rockaway Beach Line, you might know it as Queens Rail, now it’s QueensLink. It would be a game changer for our entire city.”

Scala said that QueensLink had written a letter to the governor and mayor back in August, advocating for an Environmental Impact Study to be done for the feasibility of QueensLink, which was supported by 15 council members and two community boards that would be impacted by QueensLink, including Rockaway’s CB14. So the announcement of the funding for the park came as a disappointment. “Despite that, the mayor allocated money for QueensWay, which could threaten the Link. They’re telling us the land can be held for transit, but can we trust that? We have to fight. For those who think it’s over, it’s not,” Scala said.

Scala was followed by the many local supporters of QueensLink. Assemblywoman Stacey Pheffer Amato vowed to give her continuous support for the rail line as she’s done since she was first elected. District 32’s Councilwoman Joann Ariola said the reactivation of this rail line is something she’s supported since 1994 and she’ll continue that fight. “Everything happens at an appointed time and I think this is the appointed time,” she said, adding that QueensLink would benefit all of Queens, and she is proud to fund QueensLink so they can continue their advocacy efforts. “I’m happy to be in a position to fight for you and have discussions with the mayor, who I know is going to listen, and understand that yes, we need green space, but here in Queens, we need better transportation,” Ariola said.

Dolores Orr, Chairwoman of CB14, also hopes Mayor Adams will reconsider. “When this announcement was made, I was stunned. I believe the mayor made this decision without the input of the communities it will impact the most. I want to believe he was not fully informed and he’s going to think on this and open the conversation,” Orr said.

Paul King, president of the Belle Harbor Property Owner’s Association and a congressional candidate, spoke on behalf of Belle Harbor, saying the civic supports the effort to reactivate the rail line, as it’s a fight that even his father fought as president of BHPOA. “We are Rockaway, we don’t quit. You’ve been keeping up the fight for a long time and we need to keep it up until this is done right,” King said.

District 31 Councilwoman Selvena Brooks-Powers, who serves as Chair of the NYC Council Committee on Transportation and Infrastructure, stood in solidarity with QueensLink and suggested the EIS be done to show the feasibility of this project. “If this is a feasible project, I’ll work closely with my partners in government to make sure we get everything we deserve which is access to affordable, reliable transportation,” Brooks-Powers said. Assemblyman Khaleel Anderson said, “I’m hopeful that we reactivate this line so we no longer have to tell our constituents that they can either have this or that. We can have this and more.” 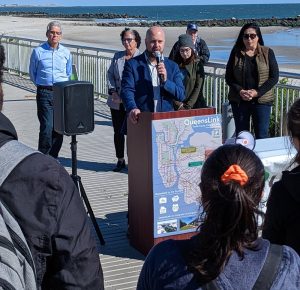 Senator James Sanders suggested bringing a big convention center to Aqueduct, which would be a big economic engine for Queens, and how that wouldn’t be possible if this rail line is replaced by a park.

Rockaway resident Joanathan Lazo, outreach coordinator for QueensLink spoke of Rockaway’s long commute times and how QueensLink would be a gamechanger. Jenna Tipaldo of the Sunrise Movement NYC spoke of the ways QueensLink would help the environment and the local economy. Charlton D’souza of Passengers United said the organization will be holding a virtual Town Hall on QueensLink on Thursdsay, October 13 at 7:30 p.m. The meeting ID is: 841 0872 8947 and the Passcode is: 730260

The rally concluded with a chant among attendees, “What do we want? QueensLink!”