Written by Kami-Leigh Agard on September 8, 2022. Posted in NEWS.

You may have spotted an adorable little boy tethered to a handsome Yellow Labrador, walking around the neighborhood, at the beach getting surf lessons from Locals Surf School or even being formally introduced by Father Jim at a Mass at St. Francis de Sales church. Meet eight-year-old Jonathan Ortega Narvaez and his BluePath autism service dog, Milo. According to Ortega Narvaez’s mom, Jennifer Gallagher, since three-year-old Milo officially became part of their family on April 4 of this year, he has forever changed the trajectory of their lives. They went from being reluctant to take Jonathan out due to fears of him running away—to boldly embracing outdoor adventures together as a family.

As to how Milo entered the family’s lives, Gallagher said it all began in April 2021 after she watched a week-long autism awareness month series by NBC’s “The Today Show” broadcast journalist, Hoda Kotb.

“That day, Hoda did a segment about how life changing it was for a little autistic boy in Queens after he received a BluePath autism service dog. I totally related because like Jonathan, this child eloped, which is frightening for parents of autistic children, and it was beautiful to see how the dog gave the family so much relief. Before we received Milo, it was eight years since we unpacked our beach cart because as soon as my boy got to the beach, he would bolt off running.

“After my husband watched the segment, he said, ‘I’m totally in.’ He loves animals and came from homes with animals. As for me, I never had an animal. However, watching Hoda’s segment encouraged me to apply. One requirement was that you had to live within two hours of their facility in Hopewell Junction, which is an hour north of NYC in Dutchess County,” Gallagher said. 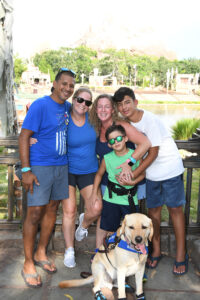 Founded in 2016, BluePath is a nonprofit organization that places service dogs with children officially diagnosed with autism—totally free of charge. They provide dogs that offer safety, companionship and opportunities for independence. One of the dogs’ purposes is to reduce bolting tendencies, which includes wandering off, that oftentimes occurs among autistic children. BluePath dogs are trained to be tethered to a child’s waist, anchoring the child should he/she begin to wander. On average, it takes $40,000 to raise and train each dog, but because raising an autism child can cost five times as much as raising a mainstream child, BluePath gives these dogs to families for free. Since its launch, BluePath has placed over 35 Labradors and Golden Retrievers with families.

According to Gallagher, BluePath thoroughly vets the families before they go through a tough period of training.

“Due to Covid, our first interview with BluePath was through Zoom. They emphasized that this was a serious commitment because the dog has to stay here in our home and do its job, which is to be there for Jonathan,” Gallagher said. “Next, they brought three dogs out here for us to video record Jonathan walking around places, like the supermarket with them, so they could assess whether an autism service dog was an option for him. Jonathan is naturally suspicious of everybody and everything, so the fact that he did so good that day was really amazing.

“When my older son, Nathaniel, left for school that morning, he said to Jonathan, ‘Do a really good job today, so we can have a dog.’ When the BluePath people were leaving that day with the dogs, I told them what Nathaniel said. Their response? ‘You can tell Nathaniel that his brother did a great job.’ So, we kind of knew that we were going to get a dog, and just waited for next steps. This was in October of 2021,” Gallagher said.

According to Gallagher, the entire process took about a year. In March of this year, they received the good news that they were going to get a dog, and had six weeks to prepare for mandatory parent training, which Gallagher described as rigorous.

“The training was so much work. There were nighttime walks, early morning walks, then training all day. We went to big box stores like K-Mart and Home Depot because they wanted us comfortable with the dog in a variety of environments. So, by the time we bring the dog home, we can handle him, and he in turn has gotten used to us. BluePath does such an unbelievable job with training. They even did this beautiful graduation ceremony, where we got to meet the puppy raiser/former owner. We learned that Milo grew up on a farm with a lovely couple and their three children. Then he was sent to live with his foster family, an unbelievable couple, who drove Milo every day to training. Now, because of Milo, we have this extended family,” Gallagher said.

As fate would have it, initially the family was supposed to get a lab named, Beulah, not Milo. Unfortunately, three weeks before, after her final medical, it was determined that Beulah’s cataracts had advanced. They informed Gallagher and her family about Beulah’s eye condition, and that since she couldn’t be a service dog, her foster family was going to adopt her.

Gallagher shared, “We were devastated, but then we got Milo, and now I can’t imagine that Beulah would have been a better fit for us than Milo.”

And since having Milo, Jonathan has gone on all sorts of adventures, including Disney World, learning how to surf, going on neighborhood walks, and even the once feared supermarket.

“When he knows it’s time to go out with Milo, Jonathan puts the belt on and holds the dog’s handle. Milo has given him so much confidence, even with him pronouncing more words. The other day in the supermarket he was yelling, “Yellow Oreos!” Gallagher shared.

According to BluePath, the dogs offer more than just physical support. They reduce parents’ safety concerns and help children lead fuller lives; giving families like Gallagher’s a renewed sense of hope and empowerment.

“Being able to take Jonathan to Mass was a game changer for our family. Milo has given us the confidence and security to create memories and experience so much joy together. BluePath and Milo have truly blessed us,” Gallagher said.