Another Broad Channel Mardi Gras in the Books

Written by Dan Guarino on September 8, 2022. Posted in NEWS.

This Labor Day, Cross Bay Boulevard was filled with several hundred enthusiastic spectators as Broad Channel celebrated Mardi Gras with its own colorful homemade parade. Featuring hundreds of marchers with creative costumes and whimsical floats, off from West 10th Road about 1:30 p.m. Turning around at West 17th Road, it headed back north to the Broad Channel Athletic Club field. There, a post-parade party followed with music and food awaited, with a huge waterslide and a bounce house for the kids. 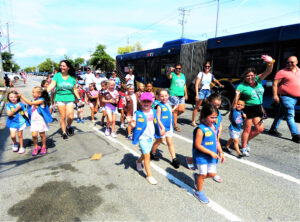 Mardi Gras originally started as a farewell to summer celebration in once seasonal communities like Roxbury, Breezy and Broad Channel. It became a lively season-long community fundraising drive in Broad Channel in 1908 to pay for their newly built firehouse, which is still in use today. Since then, funds raised each year have benefited alternating Broad Channel non-profit groups. 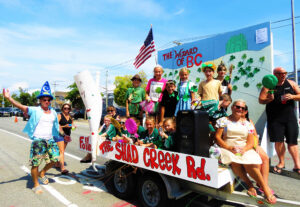 This year, hosts, the Broad Channel Fire department, raised $40,909. Under the banner “Robbie For Mayor,” resident Robbie O’Hare raised $7,146 of that. Each year fundraising residents vie for Mardi Gras titles. Mayor “could not have been a more appropriate one,” his mother, Susan O’Hare, said. “He’s gotten to know everyone in Broad Channel” by going door to door, running raffles and selling snacks at the Broad Channel summer basketball program. 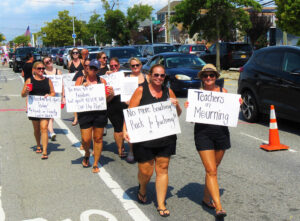 Several categories of trophies were given for floats and walkers in the parade. These included Prettiest for ‘Sam Hunt House Party’ (float) and Girl Scout Troop 04434 (walkers). Funniest 1st and 2nd place went to ‘Shark Attack’ and ‘Channel Stock’ floats, respectively, and walkers ‘Teachers in Mourning’ and ‘Meet the Mets.’ Most Original went to the ‘Wizard of BC’ float and 1st and 2nd walkers ‘Robbie for Mayor’ and ‘Ghost Busters.’ 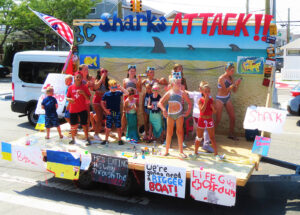 Swiftly organizing for their very first Mardi Gras parade was a challenge for very newly formed Girl Scout Troop 04434 and their way of stepping into this century plus tradition of service and fun. “We’re very service oriented,” said Troop Co-Leader Ali Traegler. With many planned projects, “We’re looking to help our community.”

As Mardi Gras parade festivities wound down, neighbors and friends gathered for their own individual barbecues, music and house parties.

Once again, Broad Channel raised a colorful cup to another summer gone by.