Written by Rockaway Staff on September 15, 2022. Posted in NEWS.

Twenty-one years later, 9/11 will never be forgotten. On Sunday, September 11, crowds gathered at Tribute Park on Beach 116th Street for the annual ceremony to remember the events that took place that day 21 years ago, and the many lives that were lost. 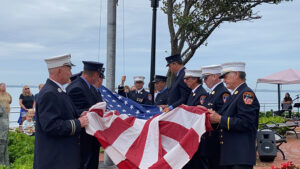 A color guard and a procession of bagpipers opened the ceremony as members of the FDNY circled the central mosaic of the park. Members of the ceremonial unit of the FDNY unfolded a flag and raised it to half-mast. Afterwards, Community Board 14 Chair Dolores Orr let people know that the ceremonial unit was missing a member this year—Firefighter Timmy Klein—who was killed on the job in April. “We miss him dearly,” she said.  Father Bill Sweeney of St. Francis de Sales led a prayer. Then the  names of the more than 70 members of the community who were killed on 9/11 were read aloud as a bell was tolled and family members, elected officials and members of the community placed roses around the center mosaic in their memory. 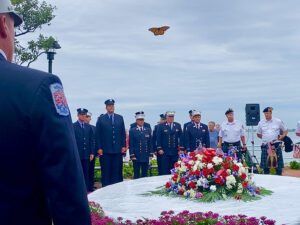 Music duo Aerial Acoustics played instrumentals while Chazmond Peacock sang during the ceremony. Roses were placed on the firefighter rock and on the police bench in memory of the FDNY and police officers who died on 9/11. The ceremony concluded with a water display on the bay by the FDNY harbor unit, with the Freedom Tower in the backdrop. 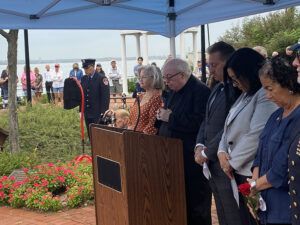 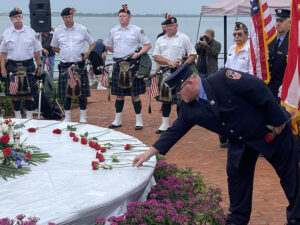 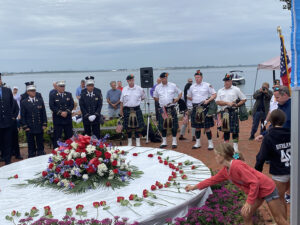 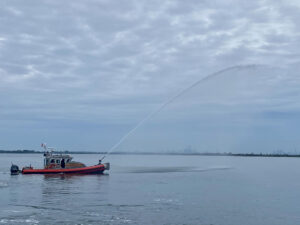 For more information about Tribute Park and additional photos from the ceremony, see: www.rockawaytributepark.org