Written by Katie McFadden on September 15, 2022. Posted in NEWS.

It’s not easy to find a person whose life has not been affected by cancer in some way. Whether it’s a friend, a family member, a loved one or themselves, it seems everyone knows someone who has battled the disease. As Rockaway does, neighbors have come up with ways to support those dealing with cancer by helping those in need. The 4th Annual Catch a Cure 5K is Sunday, September 25.

On September 25, Rockaway will run and walk on behalf of Rockaway, Breezy Point and Broad Channel residents dealing with cancer, in hopes of one day finding a cure for them and those across the globe. The Catch a Cure 5K is an annual event that raises money for local residents impacted by cancer, in memory of those who have unfortunately passed away due to cancer and in honor of those who have been victorious in their battles with the disease.

After local resident Pam Collins died of cancer in 2017, Robin Hoffman, who had gone through her own battle with breast cancer, and Megan Rochelle, wanted to come up with a way to honor local residents who passed from cancer while showing support for those still going through their battles. As Pam Collins was an avid runner, they launched Catch a Cure with a 5K race in 2017. The Catch a Cure 5K has since become a successful annual event, raising around $20K each year. Due to Covid, the event was put on hiatus for the last two years and funds were raised through a 50/50 instead but next Sunday, the Catch a Cure 5K returns to its full glory. 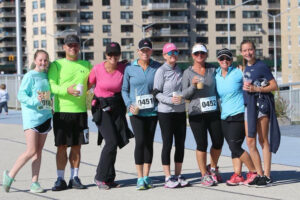 This year is also a special one as with the help of Keith Sullivan, Catch a Cure has officially become a 501(c)3 nonprofit charity. It is overseen by a board of Megan Rochelle, Robin Hoffman, Linda Humphrey and Jean Condon. Now with the official nonprofit status, the ladies hope to not just hold the annual Catch a Cure 5K, but they plan on coming up with other events and fundraising ideas to grow this successful movement that helps local families dealing with cancer. Among some of those ideas are a swab drive for people to see if they’re a match to be a bone marrow donor, plus there are talks of a half-marathon. But for now, Catch a Cure’s main event is the annual 5K run/walk.

This year’s 5K is being held in memory of Denise Nopper of Broad Channel, Pam Collins of Rockaway and Danny Dady, who all died of cancer. A plaque will be dedicated to the families of each at the event. But it also honors those whose cancer stories give hope. This year’s honorees include Lilly O’Sullivan of Broad Channel, Siobhan O’Sullivan of Rockaway and Ann Marie Murphy of Breezy Point, who have all overcome cancer. The honorees will all receive sweatshirts during the event.

Each year, residents from each of the local communities are honored as a way to bring the neighboring communities together while spreading awareness. As Rochelle mentions, each year, Humphrey gives a speech reminding people of this. “It’s a really nice day and Linda Humphrey gives a speech where she mentions how even though Rockaway, Breezy and Broad Channel are different neighborhoods, we all come together as one for those in need and it’s a nice way to get everyone together to celebrate those in remission and those who have passed away while raising funds to help those still going through cancer,” Rochelle said.

The money raised goes directly to those in need, or even toward morale boosters for local cancer patients. “We’ve had people call us and nominate people to donate to, so we’ll work with them to see what we can do to help them. Sometimes their friends will say they really need a spa day, so we’ll send someone to the spa, but most of the time we do monetary donations to those battling cancer,” Rochelle said.

Funds are raised at this event through entry fees, t-shirt sales, a big 50/50 raffle for $20 a ticket and generous donations from local businesses and neighbors. “We’ve had so much support from the local businesses in Rockaway and families who have been so generous with donations,” Rochelle said. “We do t-shirts, water stations and mile markers that come with different levels for sponsorships. I can’t get over how generous people are with their donations. There’s no place like Rockaway. Whenever someone needs help, our Rockaway, Breezy and Broad Channel neighbors are so quick to help those out in a time of need.”

The 5K event is open to all, whether you’re running, jogging or walking. “People bring carriages, kids ride scooters, it’s for runners and walkers,” Rochelle said. Jim McVeigh of the Rockaway Track Club helps coordinate the run and track times, so those who are open to competition are welcome to race. The day kicks off with a prayer by Father Jim Cunningham of St. Francis de Sales and the singing of the National Anthem before the run. An after-party is held at Rogers on Beach 116th Street to give out race medals, to announce the winner of the 50/50 and to distribute plaques to the families of the people who the run is in memory of and sweatshirts for the honorees who are in remission. “It’s a nice day for the community to get together and celebrate,” Rochelle said.

The Catch a Cure 5K takes place Sunday, September 25 at 9 a.m. starting on the boardwalk on Beach 116th Street. The event is rain or shine. Those interested in running or walking can pre-register online at www.Rockawaytc.org or at an in-person pre-registration at the Belle Harbor Yacht Club (533 Beach 126th Street) on Thursday, September 22 from 6 p.m. to 9 p.m.