From RISE: Bee the Change

The buzz about RISE (Rockaway Initiative for Sustainability and Equity) is that it is about engaging the community to “Bee the Change” that is needed to make our peninsula and planet a sustainable place to live. One of the new initiatives toward achieving that goal is raising bees. 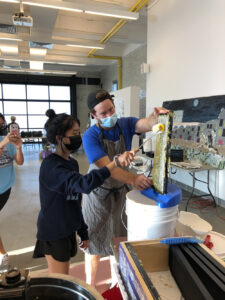 Back on Saturday, April 20, 2022, Jeanne DuPont, RISE executive director, and her husband, John Nishimoto, transported four different bee colonies from Saratoga, New York, to the firehouse on Beach 59th Street and Rockaway Beach Boulevard in Far Rockaway. Suited up in beekeeping jackets and gloves, they placed them on RISE’s terrace until Master Beekeeper Carl Flatow could come by three days later to properly set up the hives.

Four months and a few bee stings later, Rockaway Honeyworks’ first harvest filled 24 one-ounce jars, 1 six-ounce jar, and 3 two-quart Ball jars. A modest extraction, to be sure, but the beginning of a new project for Shore Corps and Environmentor student interns at RISE and for staff and community volunteers.

The bees and their hives are being prepped for the colder fall and winter months, and the hope is that next spring and summer, not only will they be buzzing about but our beloved community will be too!