Now that the summer season is over and our lifeguards did a mighty fine job of keeping our beaches safe for another year, it’s about time some of those guards who went above and beyond get some recognition. Before the announcement of the Poseidon Parade winners at the Beach 97th Concessions on Saturday, September 17, lifeguard Bobby Butler, in sea star orange, did just that by awarding certificates to some stand out lifeguards.

The three winners who were announced couldn’t be there, as many have returned to college or had other obligations, but a certificate was made for each one saying,  “The Guardians of the Atlantic present this certificate to you for an exemplary display of beach lifesaving.  Your actions showed a commitment and passion for ocean safety that went beyond the normal call of duty.  The Rockaway Mermaid Brigade, and Guardians of the Atlantic thank you for your service to this city and community.” 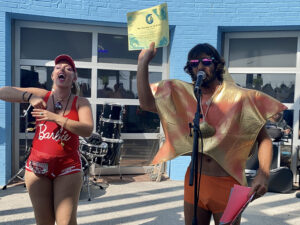 Among this ye­ar’s lifeguard honorees are Amber Walters of 149 Shack, Liam Burns of 73 Shack and Robbie Agoglia of 59 Shack.

As announced by Butler, Walters went the distance to save some teens this summer. “On Saturday July 30, two children were unable to come back to shore on their paddle boards. Amber swam several hundred yards out, to assist in their safe return. This rescue went above and beyond the normal call of duty and was mentioned in The Rockaway Times,” Butler said.

Burns made an epic solo save this summer. “On Tuesday August 16, Liam, who was shipped out to 97 Shack, responded to an adult swimmer in distress on the downtown side of the 98th Street jetty. Before backup lifeguards were able to respond, Burns swam the panicked victim around the rocks unassisted.  He maintained his composure and went with the current in a rare solo save. His quick thinking and bravery can be thanked for the successful, yet dangerous, rescue,” Butler said.

Agoglia’s quick actions saved the life of a baby. “On August 3, Robbie was shipped out to 17th Street Shack. He responded to an infant presenting life threatening circulatory and respiratory distress. He initiated CPR and successfully resuscitated the infant who made a full recovery. His ability to follow through with his duty by recalling and applying his training in a high stress situation was remarkable,” Butler said.

A member of Walters’ family was on site to collect her certificate. The others will receive their certificates at a later time. Congratulations and a huge thank you to all of our Rockaway lifeguards!