Written by Katie McFadden on September 29, 2022. Posted in NEWS.

From teachers and peers who left an impact, to the football games with cheerleaders and majorettes on the sidelines, at a school in a beach community where everybody knew everybody. Those are some of the things people still reminisce about from their days at Far Rockaway High School. From October 14 through October 16, FRHS alumni can bring those memories to life at a weekend-long celebration for the school’s 125th anniversary.

Far Rockaway High School, as those many alumni remember it, no longer exists. The last class graduated in 2011 and the building became known as the Far Rockaway Educational Complex, now housing four smaller schools. But the memories of those who went there remain, and with such a long history, there’s plenty of them.

The building at 821 Beach 25th Street, first opened its doors January 31, 1929. But Far Rockaway High School’s history goes back much further, as the first high school classes were first held at what became P.S. 39, located at the corner of what is now Nameoke and Dinsmore Avenues. High school classes began in Far Rockaway in the mid-1890s and in 1897, with a visit from “Inspector Cobb” from the state’s Board of Regents, the school was officially designated Far Rockaway High School, beginning its rich 125-year history.

That history includes some notable graduates including Nobel Prize winners, Baruch Samuel Blumberg, Richard Feynman and Burton Richter; columnist Joyce Brothers; sports legends like basketball star Nancy Lieberman and former Knicks player John Warren, and even some they may want to forget, like Ponzi schemer Bernie Madoff. But it is a place where thousands of others got their start.

And in mid-October, all of those folks are welcome to relive the heyday of the school with a 125th anniversary celebration. A committee spearheaded by Alan Silverstein, Class of ’70, and Skip Weinstock, Class of ’63, has been hard at work for more than two years, planning a huge event for the school’s 125th anniversary after a successful 100th anniversary reunion in 1997.

After attending other alumni events and reunions, and realizing many classmates are getting older, and even having lost some, for Silverstein and Weinstock, this 125th anniversary may be the last opportunity for schoolmates to get together in a big way. “This will be the last hurrah for many,” Silverstein said. “This is an opportunity to see many people we haven’t seen for a long time and for many of us, it may be the last time,” Weinstock said.

And many are ready to come from near and far for that last hurrah. When the men began this process, they sent out a survey to about 3,000 people to ask what they would like to see at a reunion. As of now, they have more than 700 people confirming that they’ll be here for the festivities, and they’re expecting closer to 1,000 to show up.

“We have 18 people coming from the Midwest, Utah, Montana, Idaho, California, Arkansas,” Silverstein said. Weinstock himself will be hopping a plane from California. The alumni are also coming from all different graduating classes. “The oldest person we have coming graduated in the late ‘40s. And they’ll be joining classes all through the ‘50s to the ‘90s,” Silverstein said.

What was it about FRHS that will bring so many people out for the 125th anniversary? “It wasn’t just about the high school, it was about the community,” Silverstein said. Weinstock added “As coined by one of our grads, Donna Gaines from the Class of 1968, ‘American by Birth, Rockaway by the Grace of God,’ and I think that sums it up. It was a unique place to grow up.”

Silverstein added, “No matter where you lived on the peninsula, one way or another, we wound up in a building called Far Rockaway High School, and one way or another, everyone knew each other. It was a place that brings back a lot of memories for a number of generations that spent their lives going to Rockaway. That one high school molded so many people,” Silverstein said. 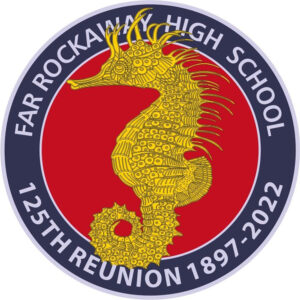 And those coming out for the big reunion are in for a weekend full of events. It all begins Friday, October 14 with a meet and greet at the Marriott Hotel in Uniondale from 6 p.m. to 1 a.m. This event, open to anyone, will serve as a get together with a cash bar and cash menu in the hotel’s ballroom.

On Saturday, October 15, the main festivities begin. The day kicks off with a car parade from Beach 116th to Far Rockaway High School. Participating cars will meet in the municipal lot on Beach 116th and will be escorted by the 100th and then 101st police precincts to the high school. At 10 a.m. a check-in will be held to watch a football game on the field, which will begin at 11 a.m. and last for about three hours.

At halftime, local elected officials and principals of the schools on the Far Rockaway Educational Campus will participate in an awards ceremony and former cheerleaders and majorettes of past classes will give a performance. Silverstein says at some point in the future, the alumni hope to raise funds to replace the scoreboard for the football field. After the game on Saturday, visitors are invited to lunch and then students and faculty will be offering a tour of the school, in which people will be able to visit classrooms, and then everyone will be escorted to the auditorium for another award ceremony and a performance by the school’s orchestra.

On Saturday night, there will be a gala at the Sands Country Club in Atlantic Beach. There will be an open bar, passed appetizers, a buffet style dinner with more than 30 dishes to choose from, music and dancing, a Viennese dessert table and a photo booth. The first 700 people to register for the gala also receive a special gold-plated medallion with the FRHS logo. “This is going to be a marvelous event,” Silverstein said.

For those who want to keep the festivities going, on Sunday, October 16, the weekend wraps up with a brunch at the Marriott Hotel in Uniondale from 11 a.m. to 2 p.m. This includes made to order breakfast options, a seafood buffet and an open premium liquor and beverage bar.

Participants can choose to go to certain events or to all of them. Access to all events will cost a little over $300 for the weekend. All tickets can be purchased on Eventbrite. The link can be found on the Far Rockaway High School 125th Reunion 2022 Facebook page. Anyone interested in attending the festivities can join the page to receive updates. Those not on social media can send an email to: 125frhsreunion@gmail.com for more information.