Running for a Cause

Queen’s Royal Priesthood held their 5th Annual 5K B-Cauze run/walk on Saturday, October 8 from Beach 90th Street to Beach 17th. What was the cause for this charity event? Whatever you needed it to be.

CEO and founder Queen Esther Arroyo told participants whatever you felt the need to walk or run for such as domestic violence, breast cancer awareness, mental health, peace, whatever was in your heart, was why you should run or walk. She herself had a specific reason for this walk. Queen was a former marathon runner. She felt the need to educate the community about the importance of keeping your health in check. She also partnered up with the New Visions Humanities IV School. She noted that the east and the west do not really come together, so her hope is for this race was to bring each end of the community together for a good cause. 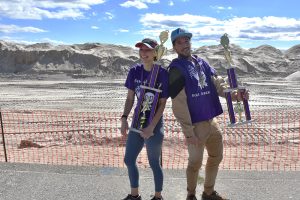 The winners this year received a trophy for coming in the top spots. The first-place winner was Mia Allen and the second-place winner was Leom Greene. Both saw a flyer about the event and decided to participate on Saturday. And the third-place winner was Dequon Lewis, who is only 11 years old. Plus 20 other people ran the race. All who completed the race received medals.

Queens Royal Priesthood sees the value in providing the city’s youth with the tools, resources, and support they need in order to reach their potential. Ever since the organization’s founding in 2014, they have strived to create more safe, vibrant and compassionate neighborhoods. Queen Esther Arroyo and her longtime friend and business partner Rosalyn Mason are often out in the streets of Rockaway helping, preaching and speaking to stop the violence in our communities. 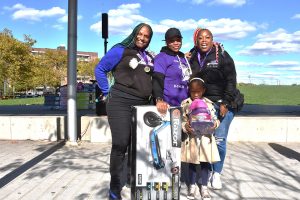 They have a long-standing reputation and have built many relationships throughout the years. As she handed out plaques, Arroyo thanked all of the partners who have stood by her in these efforts. Many organizations came out to show support by providing resources at tables after the event. Free raffle tickets were given to everyone who was there, and some great prizes were given out from goodies for the kids to $25 gift certificates. A DJ kept the crowds moving to the music while a food truck provided free food. The NYPD sponsored free cotton candy and popcorn.