Make your way through the fog and look for the corn stalks, where you’ll find some figures that put the ‘scare’ in scarecrow, then turn the corner to find the dead rising from Belle Harbor’s newest cemetery. But don’t linger too long or you may be next. The corner house on the beach block of 133rd and Rockaway Beach Boulevard has already had neighbors doing a double take all month but on Halloween night, make sure it’s one of your stops on your trick-or-treating route, as it’s when Manor of Screams will truly come to life.

Since the beginning of the month, Spencer Sutera and his family have been adding bits and pieces as a sneak peek to this season’s Halloween haunt. From a full-fledged cemetery with skeletons poking through a handmade fence and atop handmade columns, to a corn field fit for a rural horror film, plus suspicious silhouettes in the windows and ground to roof decorations, his “Manor of Screams” is the stuff of nightmares. But to Sutera, it’s his dream. 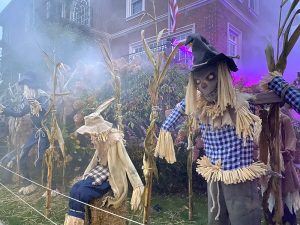 For at least 11 years, Sutera has gone bigger and better every year to outdo his vision from the previous season. Growing up with fond memories of trick-or-treating, corn fields and creepy haunts of Halloween’s past, Sutera grew an affinity for all things scary, and wanted to pass those memories along to other families, who will one day look back and recall the intricate details of the decorated corner house of Beach 133rd Street around Halloween. And for him, he hopes to make it his career.

“I love Halloween. Next to Christmas, it’s my favorite holiday,” the 21-year-old mastermind said. “My hope and dream is to have my own haunted attraction offsite so my mind is always going, to come up with new ideas.”

His love for the holiday soon grew into a hobby. When living in North Carolina for travel hockey when he was 16, Sutera had to get a job. A Halloween amusement at Carowinds turned Scarowinds caught his attention. “I worked that and after seeing that, I decided to go bigger with my decorations,” he said. Then in 2020, he picked up even more ideas while working as one of the scarers at Six Flags Fright Fest. “I was a slider at Six Flags so I had knee pads and would slide and throw sparks. I had fun with it and met some great people who gave me a lot of insight on how to build this, and now I get to share it with everyone else here,” he said.

He’s also gotten advice, and pieces, from another Halloween expert—the folks at Abracadabra in Manhattan. “Abracadabra is one of the best suppliers I know. They’re beyond any party supply store and they’ve really helped me with my animatronics. We have a very, very special one coming this year. No one has seen it yet, so it’s a big surprise,” he said. 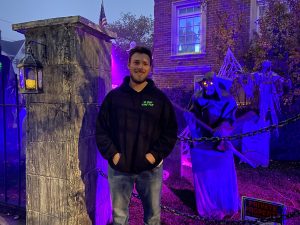 Due to weather, Sutera isn’t quite done putting the finishing touches on Manor of Screams. While the display leading up to it is already impressive, Sutera says not only does be have the big surprise coming, but 10 other animatronics that he’ll he adding in time for Halloween night. Some “animatronics” may also come much more alive on Halloween, ready to induce loud screams. “I love to hear people scream their head off. Obviously, I don’t want anyone to drop dead but I love when people scream and just love everything they see. I also want to see people smile and see them in awe. It makes me happy when people appreciate it,” he said.

Manor of Screams has already caught the attention of some from passersby who make comments on how much they love the display, to dogs who try to pull on the bones of the skeletons peeking through the fence, to even police and ambulances doing slow drive-bys to make sure Sutera’s bodies in the graveyard are nothing more than props. “They stop by and take pictures,” he said. Photos are encouraged at Manor of Screams. Last year, the family even made photo frames for kids to take photos with, to take home as memories of the scary home.

Manor of Screams is not an event, but rather a completely outdoor display. On Halloween night, all are welcome to make it a stop on their trick-or-treating route, grab some candy at a table in front of the home and take some photos to make the memories last, as the display will disappear by the next day, and Sutera’s creative mind will start spinning with new ideas for next year.