Ten years. It was ten years ago as sometime after sunset on October 29, 2012, we watched the ocean rush down the street like a river, late for a scheduled meeting with the bay on the other side. Something many had only heard stories of from another storm 52 years earlier—Donna. The thought was a little exciting.

We stayed this time. Like the Boy Who Cried Wolf, we smirked at the calls for evacuation. We had heard it all before the previous year, for a storm called Irene, which brought little fanfare. We stayed this time, ready to place our bags of sand, board our windows and make sure the pump was running in the basement. Efforts that would all be in vain. What we didn’t know was this girl Sandy had more fight in her. She had the makings of a perfect storm, and a vendetta that felt personal.

As darkness fell, the river of ocean water that met the bay, started infiltrating homes. In a matter of minutes, basements became swimming pools. Sandy laughed at sump pumps as the electricity went out. Those that could, retreated to higher levels. Efforts went toward moving belongings to higher ground in a race against floodwaters that started emerging through floorboards and into bedrooms. This was no Irene.

As we huddled on top floors, we watched through windows as fires erupted across the peninsula. The thought crossed many minds—would it be better to burn or to drown? Some were more directly hit with that question. It was a night where neighbors on surfboards became heroes, bringing other neighbors to safety as fire met water that couldn’t tame the flames.

It was a strange sight to see smoke and ash come up from puddles of water as daylight gave way to the extent of the destruction the next morning. There were a lot of strange sights that day, as neighbors emerged from their homes like zombies, having endured the horror of watching everything they knew be destroyed overnight. The boardwalk, the backbone of the peninsula, had come undone, breaking into pieces turned projectiles into homes and on to cars. Halloween was around the corner, but the streets were also filled with Christmas decorations, unearthed from garages and basements, creating a real Nightmare Before Christmas, only to be topped with a layer of snow a week later with another punch from a nor’easter. And U.S. Marines landing on the beach in the days after truly gave Rockaway that war zone feel. But not everyone had time to notice such trivial things.

For some that war began with some completely losing their homes, either as a sacrifice to the sea or left in a smoldering pile of memories. For some, that nightmare meant losing a loved one. Ten neighbors killed by the storm. For some, that war was just beginning as people had to navigate this new world of saving a home whose walls were kissed by the ocean. It began a fight against mold, a fight against darkness, a fight against insurance companies, Build it Back and FEMA. It began a series of minor heartbreaks as the realization that some things—from photo albums to wedding dresses to handwritten cards from lost loved ones—were beyond salvageable. And ultimately coming to accept that some things were more important.

The storm itself was just the beginning of the nightmare that would last days, weeks, months, and even now, years later. But it was also the birth of a new tagline for Rockaway—Resilient. 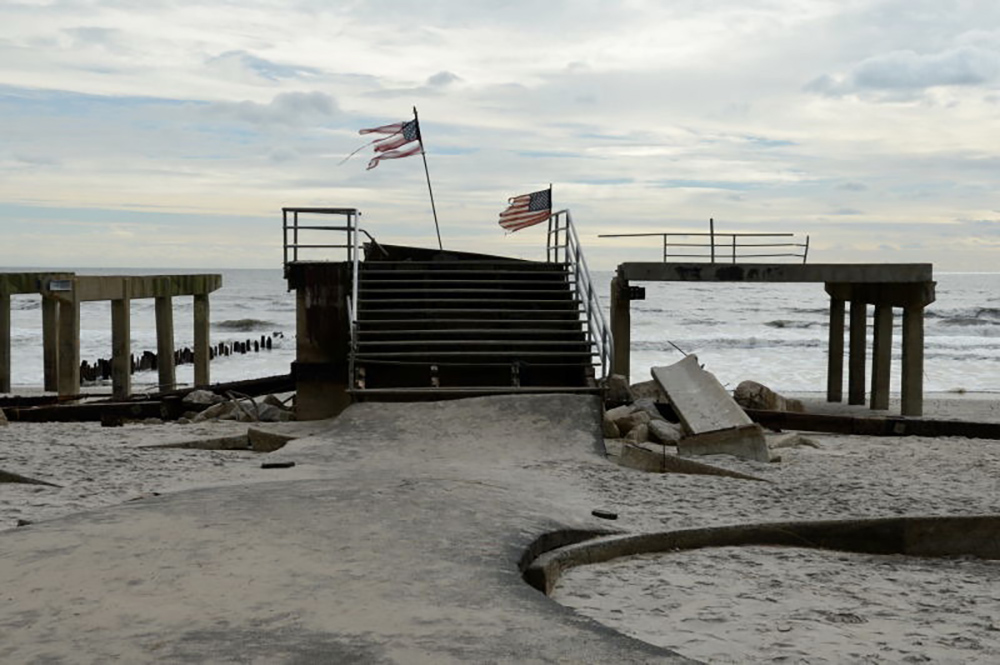 In the days and weeks and months and years, came victories. From small ones—a neighbor who was willing to share a working generator and pump, volunteers willing to get their hands dirty, coming across a gas station on the mainland that actually had gas, finding a pair of shoes that fit just right at the makeshift donation center set up at the church, that first time taking a warm shower and being able to wash off the caked mud from every crevasse, the first pile of debris that DSNY carried away from your home to bring it to the Riis Parking lot,  the time, after more than a month of working in darkness, the lights, finally, came on.

Those small victories would turn into huge ones for many. The day, after a battle with paperwork, the relief check from FEMA or insurance companies cleared. The day local schools started to reopen their doors after the new year. The first time Waldbaum’s reopened, four months after. And businesses around the peninsula started to come back—Bungalow Bar, after receiving the Bar Rescue treatment, reopened seven months after. Two years after the storm, Kennedy’s was back in Breezy. Seven years after the storm, the Harbor Light’s beacon was shining over Belle Harbor again. After a year and a half, Rockaway’s hypothetical backbone started to come back as boardwalk construction began, and three years later, ahead of summer 2017 though looking a little different, it was complete.

But the backbone of the residents on the peninsula and in Broad Channel never faltered. Though the task seemed impossible on October 30, 2012, deep down, we knew we’d be back. You don’t give up on a town where even in your darkest moments, you can rely on your neighbors most, to help get you through.

By 2015, out of 350 homes destroyed by mass fire and flooding in Breezy Point, 290 had been rebuilt. There are few empty lots remaining. Like a phoenix rising from the ashes, most of the burned down homes from Beach 129th to Beach 130th were rebuilt, even bigger, by 2015. The burned down businesses on Rockaway Beach Boulevard were replaced with a Family Dollar in 2015 and a brand-new apartment complex with new retail in 2018.

Many other new things have come along in ten years. Rockaway finally got a ferry, as a result of the storm knocking out the A train. The ferry was then knocked out in 2014 after the A train returned, until it made a more permanent return in 2017. Rockaway Beach saw a revitalization starting in 2013, with its own restaurant row popping up on Rockaway Beach Blvd. Downtown Far Rockaway is on its way to looking better than ever with a project to bring new housing, infrastructure, a new library and new retail well underway since 2018. Rockaway’s Shore Front parks and playgrounds have been returning better than ever since 2019. And Rockaway finally got its hotel. With the resurgence of interest in the Rockaway peninsula post-Sandy, people needed a place to stay and In Good Company Hospitality delivered, opening the Rockaway Hotel in the summer of 2020.

Some reminders of Sandy still exist. Signs pointing out high water marks. Empty lots from Breezy to Rockaway, where some decided not to rebuild. Buildings mostly left untouched since the storm that will eventually be demolished—the Sand Bar, the Neponsit Home, and perhaps the Chai Home. And ten years later, the shoreline protection that should’ve existed beyond a decade ago, though not yet complete, is starting to take shape—new jetties, a reinforced dune, a new heap of sand—all in hopes that the destruction of a Sandy-like storm will only be something in memories.

Rockaway is forever changed by that storm from 10 years ago. But Sandy didn’t win.