Written by Katie McFadden on November 3, 2022. Posted in NEWS.

Ahead of the 10th Anniversary of Hurricane Sandy, the U.S. Army Corps of Engineers (USACE) and partners in city, state and federal government, stopped for a moment to reflect on how far the coastal communities impacted by the storm have come.

“The goal of this event is to take a few moments to reflect on the tragedy that was Superstorm Sandy, recognize the work we’ve accomplished together over the last 10 years, and to renew our commitment to completing what we have started,” COL Matthew Luzzatto said. He thanked the partners involved, plus Senator Chuck Schumer and Senator Kirsten Gillibrand for passing the Superstorm Sandy Coastal Storm Risk Reduction Act, which brought funding to the recovery and rebuilding work after the storm. He also thanked the contractor, Michels, for helping to make the work possible. 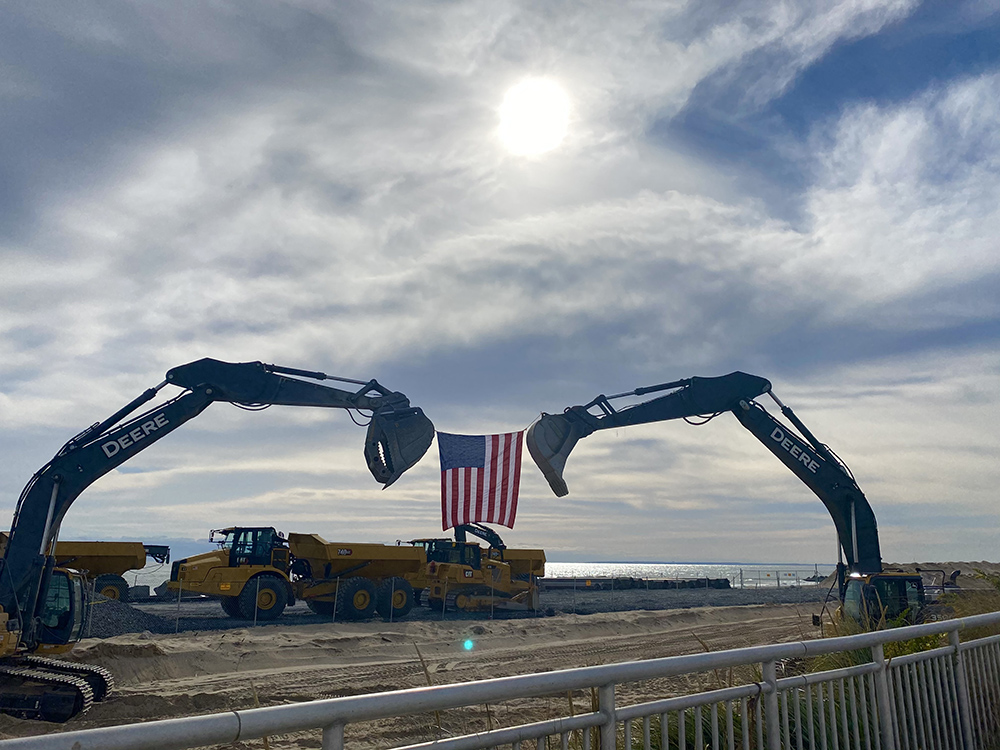 He then spoke of some of the work USACE has accomplished in ten years. This $6B job required repair and restoration of eight existing projects–most of which were substantially completed by December 2014—less than 18 months after construction began in July 2013 at a cost of $242M. Over 15.2 million cubic yards of sand was placed on beaches for projects in New York City, Long Island, and Northern New Jersey. Another $158M effort saw the District repair 29 federally maintained navigation projects for channels and structures impacted by Hurricane Sandy.  USACE’s New York District also completed work on five coastal storm risk reduction projects including in Long Beach, Downtown Montauk, Coney Island and Fire Island to Moriches Inlet.

Another nine projects, authorized through the Superstorm Sandy Supplemental Bill, will also be completed in the coming years. Six are already underway, including Rockaway’s comprehensive coastal storm risk reduction project that includes construction of a reinforced steel sheet pile dune, new and extended groins with beach restoration, and re-nourishment along the Atlantic Ocean shorefront.

New York District is also working on a nature-based plan with structural features to be constructed on the Jamaica Bay shoreline to address coastal storm surge flooding. Two construction contracts totaling $340 million are ongoing along the shorefront until early 2026 while design work continues on the Jamaica Bay features with construction scheduled to start in 2025.

Fire Island to Montauk Point and the Montauk Point Lighthouse are other New York-based projects that are also under construction. COL. Luzzatto also reminded the crowd about the new draft of the NY/NJ Harbor and Tributaries Study that was released in September and is open to public comment through January 6.

NYC Parks Deputy Commissioner for Environment and Planning, Jennifer Greenfeld,spoke about the positive changes NYC Parks has seen in the last 10 years and mentioned the success of the latest beach season. “We welcomed 4.4 million visitors to Rockaway and our wonderful concessions did exceptionally well, up almost 50% from the year before,” she said.

Pinkham reflected on what was lost during the storm and the heroes who stepped up to help. “It’s impressive to see the amount of work that’s been accomplished in ten years’ time. Let’s take time to make sure we never forget the neighbors who we lost, as well as the heroes who arose that day, neighbor helping neighbor in those early hours and first responders of this city, and then a nation who responded with resources, expertise and prayers to help set this work ahead,” Pinkham said. “I’m not a New Yorker. I’m from Idaho, so I’ve never lived through a Hurricane, but one thing I can tell you from being from Indian country is, I know about resilience, and I know about staying power and I see both of those characteristics in this community.”

New York State Department of Environmental Conservation Commissioner Basil Seggos reflected on how far the community has come in ten years and how Hurricane Sandy brought to light the reality of climate change. “It marked a turning point in our awareness of climate change and the extraordinary damages that can come from our natural environment. It reminded us about the need to reduce emissions and the need to adapt our entire landscape, not just here in New York but nationally. I believe addressing climate change will be the hardest thing we will ever do as a society,” Seggos said.

The conference ended with remarks from Queens Borough President Richards, who was a councilman at the time of Hurricane Sandy. “It’s hard to believe  it’s been a decade since Sandy changed our borough and our city forever,” he said. “The storm did not discriminate. It stole our homes, it stole our businesses, in many neighborhoods. But one thing Sandy did not do is steal our spirit here on the Rockaway peninsula and that’s what defined October 29 and the days after for me.  Not the way the wind howled or the water but how we reacted once the sun came out. It’s a story of resiliency that’s been running or 10 years. And even in these ten years we’ve made a hell of a lot of progress,” he said.

Project managers from USACE New York District are expected to be at the next Community Board 14 meeting on Wednesday, November 9, at 7:15 p.m. at the Knights of Columbus (333 Beach 90th) to provide specific updates on the current USACE work taking place on the peninsula.