The Anabas Boat Club An Upright Ship on the Right Course

Back in July, The Rockaway Ti­mes shared a story of a group’s mission to save the Anabas Bo­at Club in Broad Channel, a 121-year-old club that had seen better days. Less than five months later, we’re happy to report that the sinking ship has been righted and is on course to becoming something great once again.

On Sunday, November 20, the Anabas at 1820 Channel Road was packed with folks enjoying the Road Kill Country Outlaws playing some jams at the club’s latest fundraiser. The club itself looked a lot different than it did five months prior. It was brighter, cleaner and finally back to life.

Back in early summer 2022, Anabas member Pete Heinz wanted to do just that—bring new life to this historic club that, with low membership, was close to figuratively sinking. As the club was put on the market and its future was up in the air, a lawsuit was filed to stop the sale. The lawsuit has since been settled and the Anabas has been able to move forward. And move forward it has. The Anabas Boat Club has officially reached membership capacity—40 members as set by the Club’s bylaws, and already has a waiting list. And Pete Heinz is steering the ship as its new Commodore.

Some of those new members were at the Club for Sunday’s fundraiser, to continue that support and reap the benefits that the club has to offer. Anabas Treasurer Paul Kearns-Stanley, of Richmond Hill, said he called Heinz over the summer, remembering that he operates Rockaway Sailing. “I said, ‘what about my sailing lesson?’ The next day I rode down here on my bike and got inside and just went ‘wow.’” Kearns-Stanley officially joined in early July and as an avid fisherman and kayaker, has fully enjoyed all the club has to offer. “I fish all the time and wanted to get a fishing kayak. That’s not an easy thing to transport back and forth, so when I saw this place, I saw somewhere where I could launch right into Jamaica Bay. That was my number one reason for joining. Number two was when I got inside and I realized this place needed saving, I knew it was worth saving,”  Kearns-Stanley said.

Kearns-Stanley became part of the early group that put in the work to revitalize the club this year. “We’ve done a substantial amount of work to the structure. We dismantled and got rid of some of the derelict floats. We did some work on the docks. We increased our membership by ten times, we’ve had a few events and I think the biggest thing we’ve done is we’ve righted the ship and now we have direction,” Kearns-Stanley said. “But we still have work to do.” 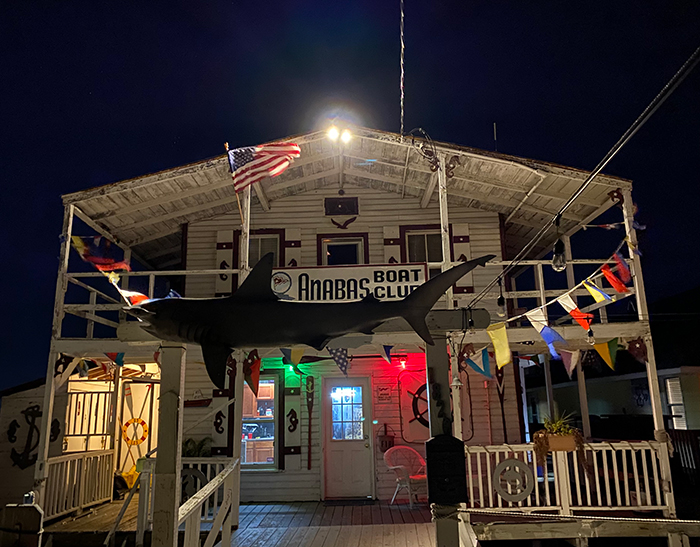 This summer, the Anabas saw plenty of activity from its dock. “This place is just amazing. Just to be able to access the bay right here is incredible. The club’s mission has always been to encourage nautical and aquatic activities—fishing, boating, swimming, and now kayaking and sailing. We got a couple kayaks donated and we’re starting to build a fleet, which is a draw, and Pete offers sailing,” Kearns-Stanley said. “We had about eight boats docked here. I did a lot of kayaking and fishing out here. We had a great fall season. The striped bass were jumping in the kayak. It’s like a wonderland out there for  me. This place has already enriched my life.”

Ingrid Ammann joined at the end of the summer. “I had a houseboat in Marina 59 for ten years and I just love Jamaica Bay. Just after Labor Day, I heard about the Anabas, and I came by one day and just fell in love. I felt fortunate that I joined when I did because membership filled immediately,” she said. And in that short time, she’s seen some of the improvements to the space. “There’s been so much hard work done to secure and clean the building, and landscaping of the front yard. It’s just been incredible to see what’s happened in a few months and I’m excited to see what happens in the summertime and to see this place thrive.”

Henry Lopez has been coming to the Anabas for several years with a friend who is a member. “We all have fishing boats, so we come here and go fishing almost every day. We usually go for porgies, striped bass and some blackfish,” Lopez said. He officially joined this year. And while the fishing is good, Lopez says the thing he appreciates most about the Club is the people. “I like the dynamic of the people here. There are people from everywhere. We got Indians, Dominicans, Puerto Ricans, people from Poland, Italy, surfers from California, older people, younger people, and everyone is cool. We all get along and the vibe is good. We all bond and that’s what I like,” he said.

With a good crew aboard, the only thing left for the Anabas to do is to move forward. Sunday’s fundraiser was the last of the year at the Club, as without a gas hookup and hot water, it will soon be closing for the season. However, other fundraising efforts are in the works that will continue to help steer the Anabas in the right direction. “These fundraisers enable us to stockpile money for the structural repairs. It would be nice to eventually have gas service and hot water, and things like this help us get working capital,” Kearns-Stanley said. “We need to get the word out about this place because this really is a gem. It’s a diamond in the rough. It needs a lot of work but the amount of progress that we’ve made is incredible. This was a ship that was going down. Now—the ship is up and it’s going.”