A big sound is coming to Rockaway this Saturday, November 26, at 8 p.m., as the Rhapsody Players hit the Rockaway Theatre Company stage for a post-Thanksgiving celebration in song.

The eight accomplished vocalists and six-piece band will be performing powerhouse hits from the ‘60s, ‘70s, ‘80s and more at RTC’s Post Theater at Fort Tilden, with all tickets available directly at the door. For the group, it marks a welcome return.

“We’ve got to do a show in Rockaway,” said the Player’s John Heffernan recently at a Bay Ridge benefit concert. Speaking to many Rockaway friends and fans who came out, he noted, “This would be like a homecoming for us. We’ve got to make this happen.”

Besides previously playing here, the group has some strong Rockaway ties. “There are seven Rhapsody Player members who are still members of the Rockaway Theatre Company. In fact, Juliette Pannone Mallon and Samantha Caiati will be returning this Saturday for their first appearance at the theater as Rhapsody Players,” Heffernan told The Rockaway Times. Among other productions, just a few years ago Heffernan himself headlined as a lead character in RTC’s “La Cage Aux Folles.”

“Our group has fond memories of the theater. And we love returning to RTC. The setting and the Rockaway audiences are fantastic!!! We cannot wait to fill that room with the best songs and beyond,” he said.

Performing everything “from pop to classics, rock and roll to rhythm and blues,” Heffernan notes, “the evening does not stop except for intermission. Song after song, it’s ensemble numbers, as well as guy medleys and girl medleys mixed with solos and duets.” 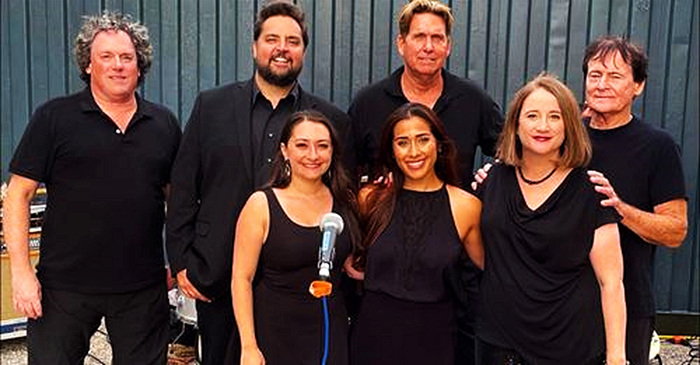 Their set includes songs like ‘Ain’t No Mountain High Enough’, ‘This Magic Moment’, ‘California Dreaming’, ‘At Last, Respect’, “It’s Too Late’, ‘Happy Together’, and ‘Midnight Train To Georgia’, from artists like Carole King, The Bee Gees, Ray Charles, The Eagles, Aretha Franklin, Motown and more.

“We hear from our audiences how incredible the singers, harmonies and band sound, even better than some of the original recordings,” Heffernan said.

Founded in 2006, the group had all worked together in various Brooklyn and Rockaway community theater groups. They decided to pool their talents and sing what they loved while raising funds for charitable organizations and worthy causes.  According to Heffernan, the group has raised over $800,000 to date.

“They really put on a fantastic show!” said one Rockaway resident who saw them at an October fundraiser for Brooklyn’s St. Patrick’s Academy. “Just amazing!”

Heffernan and the Rhapsody Players invite all far and wide to hear their sound for themselves and spend a musical ‘one-night’ only with them right here in Rockaway.

Tickets are $20 per person, cash only, and only at the door on the night of the event. No tickets will be available online. Doors open at 7 p.m. Show starts at 8 p.m.