Thanksgiving is a time to gather with family and friends and feast on an abundance of food and drink. It’s about watching the Macy’s Thanksgiving Day Parade with loved ones while chaotically preparing turkey, stuffing and all the comforting trimmings from sweet potato pie to pumpkin pie – and so much more in between.

For sports fans, it’s a time to watch the football game, cheer on your favorite team and kick back with a few beers. And no Turkey Day is complete without tuning into a holiday classic like, A Charlie Brown Thanksgiving. Oh, and let’s not forget about who retires early due to feeling comatose from overindulging and who is going to perk up with an espresso before heading out to the stores at midnight for some Black Friday deals?

But wait! Stop! While Thanksgiving traditions are no doubt all about the above – let’s take a moment to pause and be mindful of the true meaning behind these festivities – to give thanks! For the Hanna family, this Thanksgiving is an extra special one because my husband, Brian recently underwent a much-needed liver transplant at the Mayo Clinic.

This year has been such an intense, emotional road. In mid-February, I started a full-time job for the first time in 17 years. Just days before, Brian had to go out on short term disability because he was beginning to have liver failure. We were grateful that I would at least be able to compensate for Brian’s lost pay. However, just six short weeks afterwards, my work hours were cut from full time to part time. They say, “everything happens for a reason,” but I did not know what it was until a few weeks later when Brian was admitted to the intensive care unit at Mt. Sinai for internal bleeding – I was going to have to be there for him because the disease was failing him rapidly.

After his release from the hospital, we were hopeful because the liver team said they may transplant him quicker than initially anticipated. Six weeks later to no avail. Yet, Brian was continuously losing weight, becoming jaundiced, feeling weak and looked extremely frail. He was beginning to experience cramping in his hands and legs due to low hemoglobin. Still, no word on a donor. This went on for the next four months. 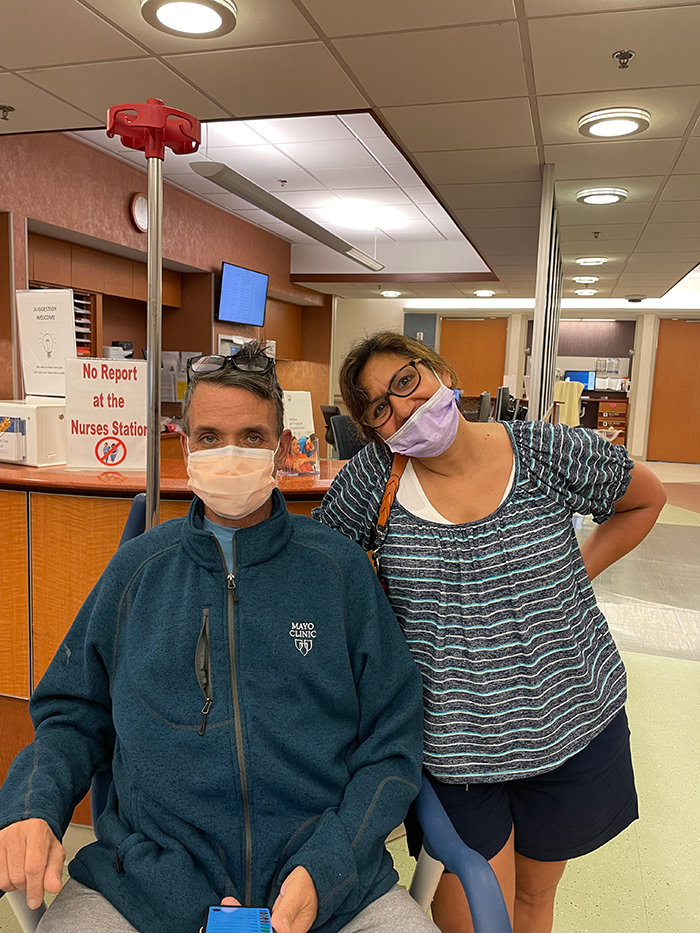 In early July, Brian applied to the Mayo Clinic to review his case. Two weeks passed with no response. By the end of July, I was laid off from my job and learned Brian would need to go out on long term disability by the end of August. I remember sitting at Tribute Park one day with a friend and feeling scared, close to defeat, then suddenly, no joke, a black cloud came over our heads and started to rain. I cried, but my friend made me laugh at the irony of the moment. I was able to regroup, then headed home to learn that the Mayo Clinic wanted us to go down to Florida for a two-week evaluation.

Brian secured an itinerary which consisted of day-long appointments for a nine-day duration, with various members of the transplant team from consults to seminars to lab tests, etc. I was impressed just looking at the numerous pages of his schedule. The other hospital’s consultation was one full day. Despair began to be replaced with hope and even excitement.

Days before flying to Jacksonville, I learned that I could not file an unemployment claim because someone tried to file a claim in my name during COVID. Instead, I had to file a fraud claim, wait for it to settle before being able to apply for benefits.

Meanwhile, messages were coming in from numerous family members, friends, local not for profit businesses wanting to help us out by way of donations from money to airfare. Wow! Who does this? I remember feeling overwhelmed with gratitude. It’s hard enough going through the motions with a sick loved one, let alone have to worry if you will go broke in the process.

One week after the Mayo Clinic placed Brian on their liver transplant waitlist –  I was back to New York for what I thought was to see our daughter, Danielle, off to her first day of senior year and to attend a cousin’s wedding. It was going to be a surprise – they didn’t know I was coming. But, instead of me surprising them, I got my own surprise – a call from Brian telling me to get the next flight back to Jacksonville because Mayo had a donor for him, and he was scheduled for surgery at 1:00 a.m. Just one week after he was on the waitlist!

All has been very successful, with the exception of a few bumps in the road, but he is in the best of hands. Brian is a miracle and I mean that whole-heartedly. We have had to rent an apartment down here in Florida as he recovers in Mayo’s care. Donations continued with a full-blown benefit held at Knights of Columbus.

Family and friends have stepped up by visiting us, helping us feel less stressed and alone. Guests have continuously come and gone like people go through a revolving door. My mother selflessly moved into our house to help out with Danielle.

So, this Thanksgiving, I want to thank you all for helping us with your prayers, donations, and time. We are forever grateful for all your generosity and are honored to have such a loving family – to have caring friends and to be part of this amazing Rockaway community.

I recently saw a sign in a store that reads: “Difficult roads often lead to beautiful destinations” –  I had to purchase it because it is Brian’s true story – and you all helped make it a reality.