An Early Start for the Little North Pole

Here comes Santa Claus, here comes Santa Claus, right down Neponsit Ave. Right after he’s eaten his turkey and picked up some Black Friday deals for the Mrs., Santa Claus will be making a stop at the home of a good friend—Joe Mure. Christmas has come early this year to The Little North Pole, which will light up on Saturday, November 26.

In its 27th year, the annual lighting of the Little North Pole will take place the Saturday right after Thanksgiving, giving locals and visitors alike even more time to see this holiday delight. With hopes of the weather being a little warmer, one of the Little North Pole’s little helpers being around on college break, and a December full of Joe Mure finding even more ways to raise funds for the Juvenile Diabetes Research Foundation (JDRF), the end-of-November lighting made sense this year. And while Christmas is arriving early to Neponsit, it’s not stopping Mure from pulling out all the stops for the annual event to light up his home.

On Saturday, head to 144-03 Neponsit Avenue for an evening of festive fun. It all starts with a pre-show at 3 p.m. featuring performances by local school and dance groups and the big show starts at 4 p.m.

This year, Joe Causi, WCBS-FM radio host, is back to emcee the event while sports radio host Sid Rosenberg and talk show host Todd Wharton will share co-hosting duties for the night. Plus there will be plenty of special guests taking the stage. Some may remember The Sopranos  star Tony Sirico aka Paulie Walnuts as a regular visitor to The Little North Pole. In wake of his passing earlier this year, another Sopranos star will be coming down to help light up the Little North Pole. Some may know him as Silvio Dante on the show, while others know him as Bruce Springsteen’s righthand man as lead guitarist of the E-Street Band. Little Steven or Miami Steve himself, Steven Van Zandt, will be coming out to help support the cause. “He wants to help out the children and JDRF and he’s excited about it. I think he’s gonna add a lot to our event this year,” Mure said.

And of course, after the Little North Pole is all lit up, and eyes and ears are dazzled by the many performances, an even bigger star will close out the show, making a special entrance—Santa Claus. The big man in the red suit will have toys for all of the children in attendance at the end of the night. 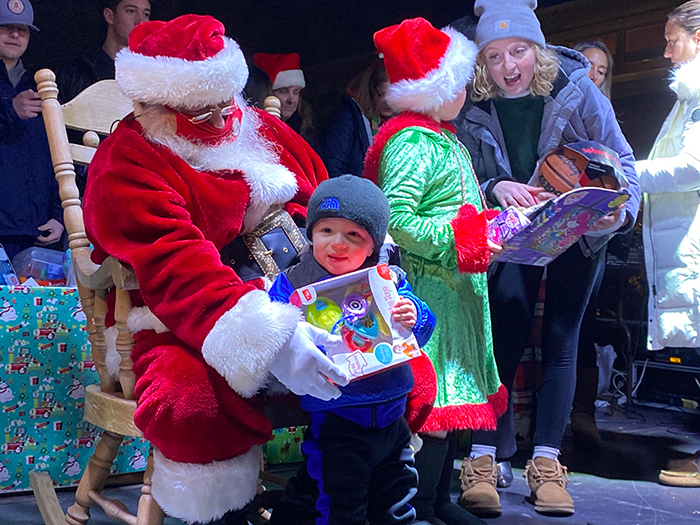 The Little North Pole is made possible by the Mure family and many volunteers that make it come to life starting before Halloween. Some of his top helpers include Richie Keane, Tony Orzano, John Sluyk, Anthony Calamari, John Reinhardt and more. Mure says the Graybeards were also a big help in setting up this year among other volunteers. Dozens of performers and businesses will also be donating their time for this cause. There will be several food stands available, with options for everyone for a $20 donation toward JDRF. Among the vendors are Anthony Canonolli serving up cannollis and cookies, Whit’s End serving pizza, Beach Bagels serving up hot chocolate and food, Bagel Barista Station, Roccos of Roc Beach, Divinos, Matteos, Brunos and Brothers Ravioli of Howard Beach, Lucy Sausage and more.

All of these folks come together each year, and Mure keeps its going every year, for a good cause. “There are two reasons for lighting the Little North Pole. One, is to put a smile on every child’s face and give them a memory of the holidays that we believe will last the rest of their lives and two, to help a special group of children that need our help—those that live each and every day with juvenile diabetes,” Mure said.

That’s why every penny collected at the lighting event and throughout the holiday season, goes towards the Juvenile Diabetes Research Foundation, which is always aiming to make advancements in the treatment of juvenile diabetes, with the hope of one day finding a cure. Most recently, JDRF celebrated the FDA approval of teplizumab, a drug that can delay the onset of type 1 diabetes in at-risk individuals. “JDRF was leading the fight to get this approved,” Mure said. Donations like those from the Little North Pole only help further such advancements. Last year, Mure was able to donate more than $80,000 to the organization from money raised through the Little North Pole.

Every penny counts from the donations collected at the event and online at www.LittleNorthPole.org. Some may also be presenting bigger contributions towards the cause, such as Owen Loof, the Best Dressed Man in Rockaway, who will be presenting a $600 check to JDRF, as part of the four charities he’s raised money for from the proceeds of his first book. It’ll all help the Mure family reach or maybe surpass their $80,000 fundraising goal this year.

But in addition to raising money for a great cause, Mure is most looking forward to those smiling faces on Saturday. “It’s not easy to keep doing this every year but when I see those smiles, it makes it well worth it. The holiday season is a good season to be happy,” he said. He’ll see even more smiles on Monday, November 28, when he does it all again for five groups of children from special needs schools on Monday morning and the St. Camillus Special Olympics program and a group of fire department handicapped kids at 6:15 p.m.

The Little North Pole is located at 144-03 Neponsit Ave. After Saturday, it will be lit up throughout the holiday season. Please support the cause by making a donation at the home or online at www.LittleNorthPole.org