A Special Stockings for a Cause Mission

Written by Katie McFadden on December 1, 2022. Posted in NEWS. 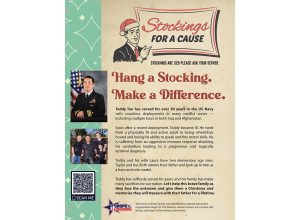 The season of giving has begun, and this season, a special family could really use some Christmas cheer. Local resident, Eugene Brennan, is hoping the community comes out strong to make this holiday season a special one for the Tan family through the 11th Annual Stockings for a Cause.

On Thanksgiving Eve, Brennan hung the first stocking at the Park Avenue Tavern, where he is a managing partner, on the anniversary of the day Stockings for a Cause first began. Each year, several restaurants across New York City, including local restaurants and In Good Company Hospitality’s establishments come together to ask the community to make at least a $20 donation for a stocking with their name to be hung in the bar or restaurant throughout the holiday season. And those donations go back towards people who have given everything for this country.

This year, those donations will go toward making a dream come true for a member of the U.S. Navy and his family that are dealing with unimaginable circumstances. Brennan had reached out to Hope for the Warriors to help him find a warrior in need, and they connected him with a family whose story brought him to tears.

“Usually we deal with wounded warriors, guys coming back injured, and this year, we learned of the sad story of a gentleman named Teddy Tan,” Brennan said. Tan served with the U.S. Navy for more than 30 years, going on several deployments to conflict zones, including multiple tours in Iraq and Afghanistan. After his last deployment, Tan came back severely ill and no longer physically able to stay active in the military. His illness, an aggressive immune response attacking his cerebellum, has left him wheelchair bound, and with loss of his speech and fine motor skills. Even worse, Tan’s diagnosis is terminal. He’s been given just two years to live. “He has a wife, Laura, and two little boys in elementary school, Taylor and Kai, and the reason why his family came into our eyesight was because a company that gives Disney trips to families such as this are only able to accommodate a certain number of people and they were capped for the year,” Brennan said. He hopes to fill that dream of giving the Tan family a trip that will leave them with lasting memories.

“They reached out to me, and I thought, this is amazing,” Brennan said. “We’re going to not only fund this extraordinary Disney World trip with all the bells and whistles, but we’re going to do more than that, and hopefully raise some money for the boys’ future with a scholarship fund.”

For Brennan, who has been organizing Stockings for a Cause for 11 years, the Tans’ story was particularly moving. “It really makes you appreciate what you have and appreciate your family and cherish the memories that you’re creating in the present because what the Tan family has to go through is something no family should,” he said. “For someone who has given so much time to our country, the least we can do is send them off for a beautiful memory that they can cherish forever. It’s not like Laura was asking for anything specific. She just knows how much time Teddy has left and all she wants is a memory for her two boys and the four of them to have together, which is just beyond heartbreaking in itself.”

That’s why Brennan is hoping this year’s Stockings for a Cause will be a huge success. In years’ past, more than $50,000 has been raised through this effort. Last year, $25,000 was raised, as things have slowed down due to Covid impacting businesses. But Brennan is hoping donations ramp up even higher this year. And local businesses are stepping up to help. Participating businesses include Pico, The Wharf, Bungalow Bar, Sugar Bowl, Margie’s, Happy Jack’s, the Harbor Light, Healy’s and the Knights of Columbus, plus IGCH establishments, including Park Avenue Tavern in Manhattan.

Stop by any of these establishments and ask the server about Stockings for a Cause. For a donation of at least $20, the business will hang a stocking in your name for the holiday season. This effort will continue through New Year’s Day. Plus, a table will be set up at the Belle Harbor Yacht Club’s Shilelagh Law Christmas Show on December 17, for people to make donations.

Hope for the Warriors is also helping to make this effort a success by accepting donations right on their website (https://support.hopeforthewarriors.org/give/449758) or by scanning the QR code on the accompanying flyer, or on tables at the participating businesses.

All of the donations collected will be presented with a check to Teddy Tan and his family at the Graybeards Dinner/Dance on February 4, to send the family on their way to Disney. “We want to get it done quick and get him and his family down there as soon as possible, while he’s as healthy as can be at this point,” Brennan said.

“This is all about these men and women who give to us day in and day out by serving this country, and this is a nice way to give back, with a tangible gift where you can see a family experience something that will create a lasting memory,” Brennan said. “There’s no better thing than giving, especially around this time of year, and especially to our servicemembers that do so much.”