Where there’s a whale, there’s a way, but sometimes nature takes its course. After an attempt by surfers to save a young sperm whale that washed up alive around the Beach 74th jetty on the morning of Tuesday, December 13, the whale later died.

At around 7:30 a.m. on Tuesday, as staff from the U.S. Army Corps contractor Michels were hard at work on beach protection measures, a young 32-foot female sperm whale was spotted on the jetty rocks. Nearby surfers and the contractors teamed up to attempt to free the whale from the rocks and then spent at least half an hour in 49-degree water on the 30-degree morning, trying to push the animal back into deeper waters, but to no avail. About two hours later, the animal died. It is not clear what the cause of death was, but it is common for whales to come close to the shoreline when already sick or injured. 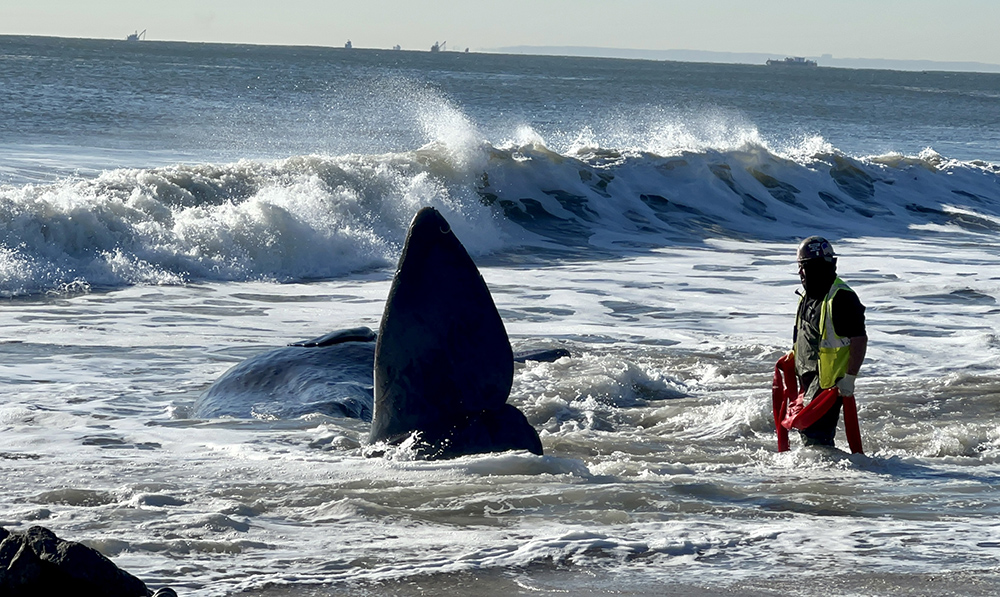 As the whale conveniently beached in a spot where Michels was working, members of their crew were able to help pull the deceased animal to shore. One contactor put on waders and spent several minutes attempting to lasso the whale’s tale with a heavy-duty rope, to attach it to a piece of equipment to drag it on to the beach. Once on the beach, members of New York City Department of Parks & Recreation, Army Corps of Engineers, and New York State Department of Environmental Conservation made sure to secure and monitor the area to keep spectators at a safe distance while members of the Atlantic Marine Conservation Society (AMSEAS) arrived to perform a necropsy on the animal to determine the cause of death.

A necropsy (animal autopsy) can take several hours, so with daylight running out, AMSEAS took measurements and photos in preparation of performing a full necropsy on the morning of Wednesday, December 14. As we go to press, AMSEAS did not release any preliminary results. Full necropsy results could take a few weeks.

However, AMSEAS did provide some helpful information on Tuesday. “Sperm whales are listed as endangered under the Endangered Species Act, so conducting the examination and collecting as much information as possible about this animal is very important to AMSEAS,” the organization said in a Facebook post. “This whale marks the 6th large whale to strand in NY since October 20, 2022.”

This sperm whale stranding came just eight days after another sperm whale, a 12-foot baby, washed up dead on a beach just across the harbor in Keansburg, NJ. On Saturday, December 9, a 31-foot humpback whale washed up dead in Amagansett in the Hamptons, after previously washing up on two other LI beaches as early as December 3. Also on Saturday, December 9, a 30-foot humpback washed up dead on Strathmere, appropriately named Whale Beach, in south New Jersey. On November 10, a minke whale washed up and later died in Southold on Long Island. In mid-October AMSEAS responded to a dead sperm whale calf in Westhampton.

While some were impressed with the heroics of the surfers that attempted to push Rockaway’s sperm whale back into deeper waters on Tuesday, AMSEAS discourages this behavior, for the sake of the animal, and the people involved. “We urge everyone to be safe when observing whales, dolphins, seals or sea turtles- especially stranded animals. These animals, when distressed, can be very dangerous,” AMSEAS posted to Facebook. Touching these animals is also illegal. Instead, they suggest leaving it up to the professionals. “In New York, report all stranded marine mammals and sea turtles to the NY Stranding Hotline: 631-369-9829. For all other states in the northeast, call NOAA’s marine mammal and sea turtle stranding hotline 866-755-6622 to be directed to a trained responder,” AMSEAS said. “Please remember that dolphins, porpoises, and whales are protected by the Marine Mammal Protection Act, which makes touching, feeding, or otherwise coming into contact with these animals illegal. The best way to assist these animals, and keep them and yourself safe, is by calling trained responders and maintaining a 150-foot distance. Never attempt to return a large whale or other marine mammal back to the water without guided support from trained responders.” 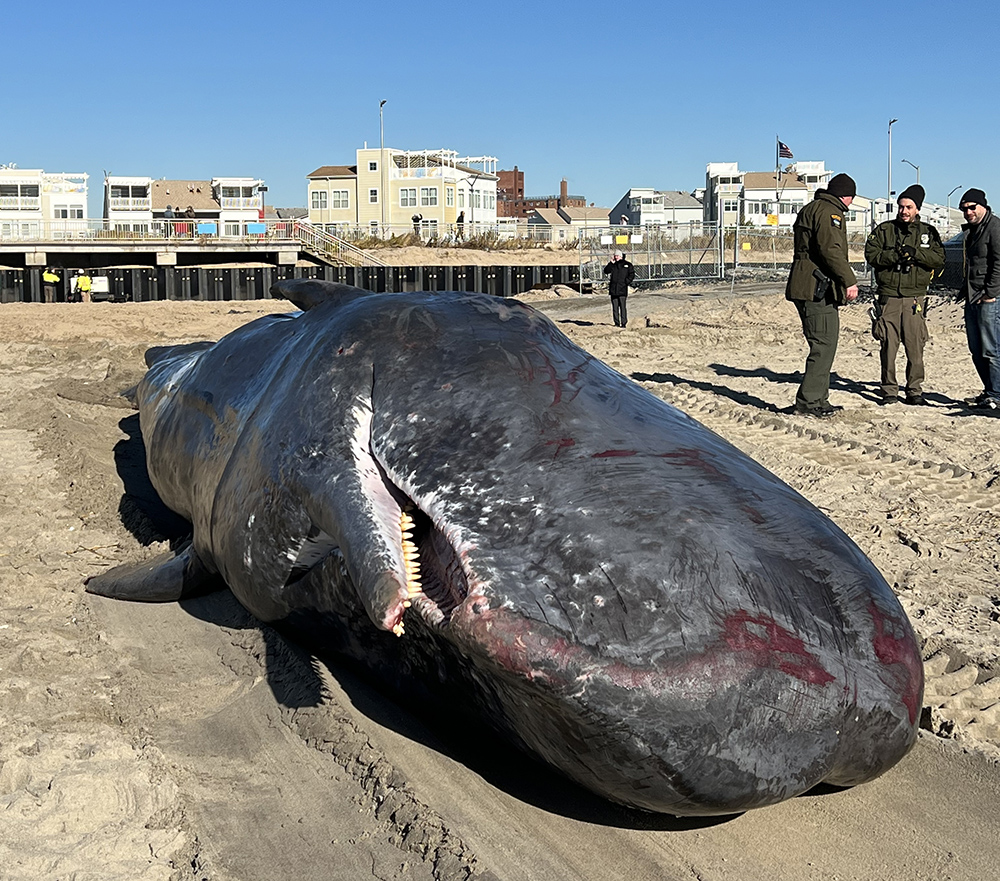 Sperm whales are the largest of the toothed whales, and are recognized by their large, blunt heads. It’s the same type of whale in the novel Moby Dick, which ironically mentions Rockaway Beach in the first chapter. They commonly dive in deep water, hunting for squid.  According to the NYSDEC, “Sperm whales, known for their deep diving, are found off New York at the continental shelf break and occasionally in the shallow waters near Montauk and Block Island. They are the only toothed large whale and can dive to over 2,000 feet for up to 45 minutes. Sperm whales have the largest brain of any animal to have ever lived and are named for the waxy substance found in their heads (spermaceti) that was used in candles and ointments when whaling was still practiced.” Female sperm whales can grow up to 40 feet and weigh 15 tons, while males can grow to up 50 ft and weigh 45 tons.

After the necropsy is performed on Wednesday, it is likely the remains of the whale will be buried on site, as has been done with previous whales that have washed up on our shores. We will provide updates on the results in future issues.