The Nightmare Before Christmas

‘Twas the nightmare before Christmas, when locals awoke, looking outside their windows at what seemed like a joke. They quickly arose from their snuggly beds, as visions of Hurricane Sandy danced in their heads.

On the morning of Friday, December 23, residents from Broad Channel to Rockaway didn’t wake up to an early White Christmas, but instead a very, very wet one when floodwaters inundated roads and basements.

Like Hurricane Sandy ten years earlier, Thursday into Friday’s storm was met with the perfect ingredients for a disaster. The New Moon on Friday set the stage for extra high tides. As high tide was rising before 8 a.m. on Friday, it brought an abnormally high tide of 6.52 feet. Combined with heavy rains and winds reaching up to 35 miles per hour on Friday, it created the perfect conditions to wreak havoc on areas around Jamaica Bay. “Tides were extremely high that morning and the cause of the coastal flooding in those low-lying areas,” a spokesperson for the NYC Department of Environmental Protection said.

Parts of Broad Channel and Rockaway can see minor flooding at times, but the destructive flooding seen Friday was something that hadn’t been seen since Hurricane Sandy. Nor’easters have come and gone since then but haven’t had such effects. With little warning, many residents were left shocked to find roads turned into rivers and basements and first floors turn into swimming pools on Friday morning, as many were commuting to school, work and to get last-minute holiday shopping done. 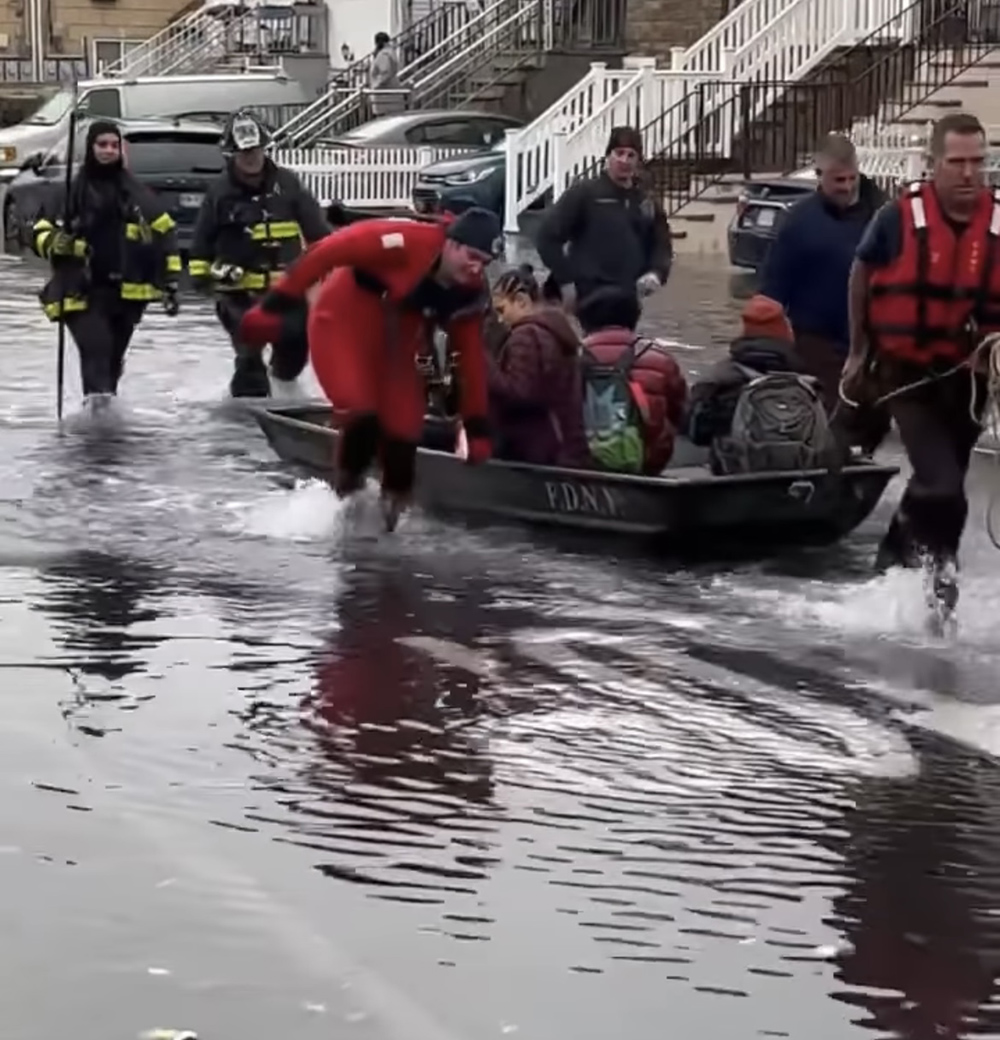 As floodwaters rose in various areas, The Rockaway Times was inundated with photos and videos from residents across Rockaway and Broad Channel, showing the impacts of the storm. As early as 6:30 a.m., floodwaters started to rise from the bay and up through catch basins on the streets, creating hazardous conditions as commuters were on their way to work and school. Water pooled in main throughways like Beach Channel Drive, around Beach 116th through the Beach 120s and Newport Avenue, the Beach 50s and Rockaway Beach Boulevard, around the bayside of Arverne, heavily on Beach 84th Street, parts of Far Rockaway and even homes in Neponsit and Belle Harbor had water-filled basements.

Broad Channel, which is no stranger to flooding, had water down side streets and Cross Bay Boulevard. Showing the extent of it, Broad Channel resident Sean Tubridy had shared a video of his foyer, which had tiny bait fish swimming across the floor. It was a moment of humor found in a frustrating circumstance.

For others, the situation became scary. And in those moments, heroes emerged. On Beach 72nd Street, a neighbor named Jo Lynn Joyce sent us a video showing a neighbor pulling a young woman out of what looked like a basement apartment, as a refrigerator was floating nearby. The man picked up the young woman and walked her over to a nearby staircase so she could retreat to higher ground. Shortly afterwards, Jo Lynn sent other videos showing NYPD officers stepping up to help, with one officer traversing through floodwater to knock on doors and make sure neighbors were okay, and another who was carrying children from a nearby apartment to a flatbed truck to be taken somewhere safe.

Meanwhile, FDNY was also in action. Rockaway Times freelancer Theresa Racine sent us video of firefighters battling through flooded streets to put out a car fire that had erupted near the Rockaway Freeway and Beach 55th Street. Meanwhile, school buses had started picking up kids for the school day before the major flooding started, and later stalled on flooded streets. FDNY responded to one such situation on Nameoke Avenue and Chandler Street by holding on to a rescue boat while kids in the bus escaped into the boat.

Teachers who were expecting a normal pre-winter vacation school day also turned into heroes on Friday. Local resident Annie White and DOE employee Christine Mahoney-Schneider sent images and photos of staff from P.S. 114 and P.S. 256 who trekked through the floodwaters, some barefoot, to make it into their schools which had waves of water hitting the door as cars passed by. As White said, “Principal Mrs. Welsome rolled up her pants, trekked into the deep puddles and was carrying kids off the bus to the sidewalk on her back” at P.S. 114. Meanwhile, across the street, after P.S. 256 staff made it into their building, Schneider emptied several cups of water from her rain boots.

It was just a few instances of heroism displayed throughout the day. But the hours and days after had some spending their Christmas weekend picking up the pieces with sump pumps and heaters hard at work to dry out soaked homes and businesses, and removing soaked debris, including Christmas presents that were stored in basements. By Friday afternoon, the American Red Cross was in town and had set up a relief and resource center at Goldie Maple Academy on Beach 56th Street to assist any­one who was impacted by the flooding. 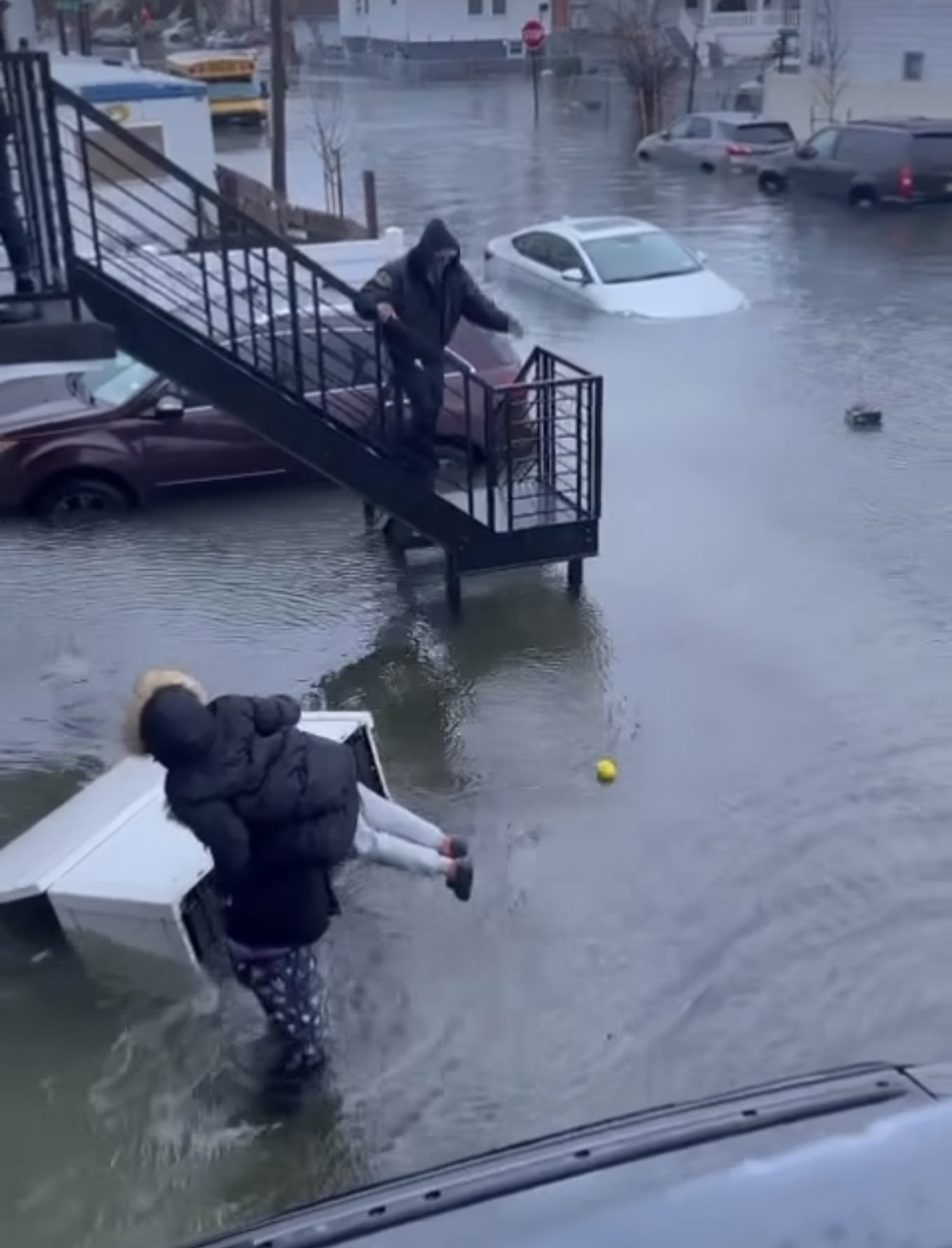 On December 24, Governor Kathy Hochul came to Rockaway to survey some of the damage and speak to locals who were impacted by the storm and met with local elected officials such as Rep. Gregory Meeks, Councilwoman Selvena Brooks-Powers, Senator James Sanders, Assemblyman Khaleel Anderson and Queens Borough President Donovan Richards, to discuss ways to address the recent flooding.

“I just completed a very chilly tour of part of Far Rockway to assess the damage that was occurring here as a result of flooding. Upwards of three feet of water rushed through the streets, damaged some of the homes,” Hochul said during an afternoon press conference on Saturday. “We’re going to meet with FEMA. In addition to having a statewide Emergency Declaration, I’ll be asking the federal government for a Declaration of Emergency that’ll allow us to seek reimbursements for the extraordinary expenses of all the overtime.”