It’s Curtains Up on ‘Raise Your Voice’ at RTC

Voices will be raised, and young actors will bring their dancing, singing and dramatic talents to the Rockaway Theatre Company stage in “Musical Theatre International’s Broadway Junior Revue: Raise Your Voice.”

The show, which features two full casts and delivers over a dozen Broadway songs, opens Friday, January 27, and runs through Sunday, February 5, at RTC’s Post Theater in Fort Tilden.

Susan Corning notes, “These young actors always amaze me every year. They are with us because they want to grow as thespians. They are hungry for theatre knowledge and experience. My favorite part is being given the opportunity to work and create theatre with our Teens and Young Stars.”

“Raise Your Voice” will feature two alternating casts, Red and Blue, with 23 and 24 members respectively, ranging in age from 7 to 17. Even the stage crew consists of ten of the teens, plus all the workshop instructors. “It takes a village,” Press notes wryly.

Corning has been theatrically involved since age 6, when her parents were active in community theatre in Michigan. Going from high school drama to college, she eventually joined RTC in 2006.

Melchiorri has been involved in the theater since 2006. “I got my start at RTC as a member of the Young People’s Musical Theater Workshop! And I have been active in theater both inside RTC and out ever since,” she said. 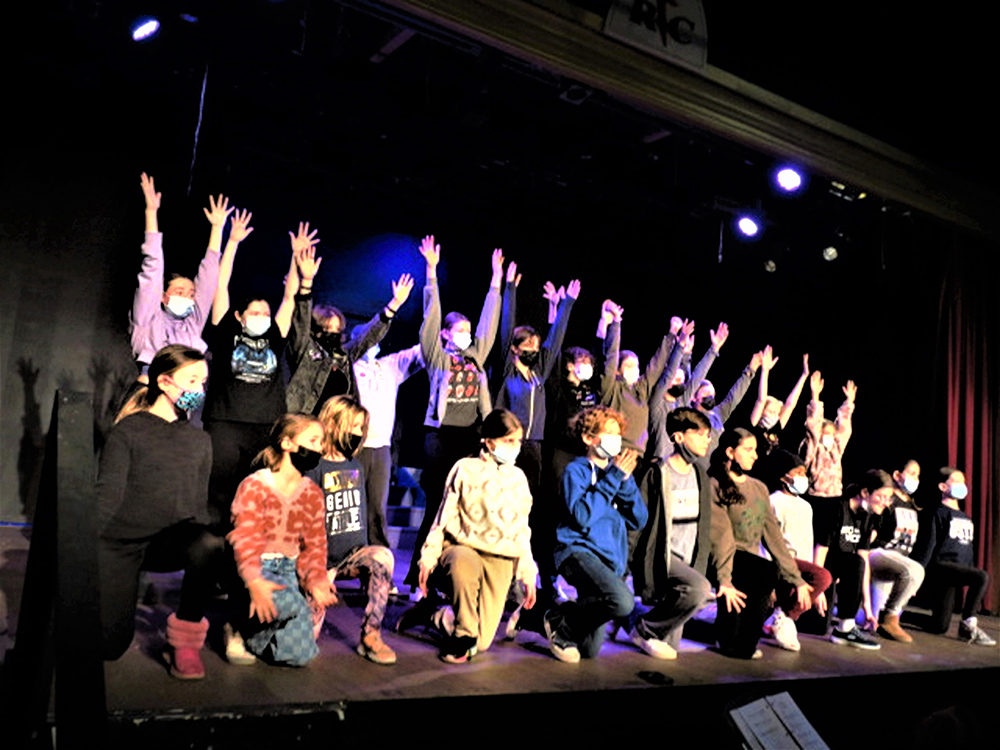 This new show “is a musical revue and has many different songs as opposed to one continuous plotline,” Melchiorri said. “It really has a central theme of celebration and speaking up for yourself! All of the songs talk about different ways in which the characters have put themselves out there and stood for what they wanted and/or needed.”

Corning agrees, “Each number has the theme of speaking out or raising your voice for others to hear. I thought this was a wonderful message for our workshop to work on, for themselves and others.”

Among Corning’s favorite numbers are “Why We Tell The Story” from Once On This Island, “Consider Yourself” from Oliver, “So Much Better” from Legally Blonde, “We’re All in This Together” from High School Musical, and “Spark of Creation” from Children of Eden. Melchiorri adds, “So Much Better” plus “Good Morning” from Singin’ In The Rain, and “Agony” from Into the Woods are some of his favorite songs in the show!

Other standouts and show­­stoppers include “Right Before Your Eyes” from James and the Giant Peach, Fiddler on the Roof’s “Matchmaker,” “Consider Yourself” from Mary Poppins, and The Little Mermaid’s “Part of Your World.”

The young cast has work­ed very hard to bring “Raise Your Voice” to the stage. The high-energy, commitment and direction at rehearsals are evident as each group runs through numbers again and again to bring them to professional performance level.

“We have been rehearsing since September! Every Saturday!” Melchiorri says. “The rehearsal process has been a lot of fun because we have been weaving in a lot of educational theater activities.”

“It is truly inspiring to see all of the actors’ growth throughout the process,” Melchiorri said. “They have all shown a tremendous work ethic and dedication to the show. I am also truly impressed with the support and enthusiasm that they show each other during rehearsals!”

Regarding that dedication, Cor­ning adds, “In January, we added a second rehearsal once a week.”

“We are so excited to share this amazing cast and their talents!” enthuses Melchiorri.

Oh, and “spread the word about RTC. It is the diamond of Breezy Point right on Fort Tilden!” Corning adds.

Tickets are available at www.rockawaytheatrecompany.org. Performances are January 27 through February 5, on Fridays and Saturdays at 7 p.m. and Sundays at 2 p.m., with two shows, 2 p.m. and 7 p.m., on Saturday, January 28 and February 4.